Barbara Rush has been a professional artist since 2007, a gallery owner since 2009, and an animal lover her entire life.

Nationally Renown Animal Artist, Barbara Rush, is a very colorful and structured award winning acrylic artist. Her work has been influenced by cubist artists such as Picasso, Albert Gleizes, Juan Gris, and Jean Metzinger, but her style is uniquely her own.

In 2004, after attending a museum exhibit (at The High Museum, Atlanta GA) featuring master cubists, Ms. Rush was so struck by the essence of the cubists’ deconstruction of their subjects, that she was inspired to begin drawing again, after a five year hiatus from art.

Her deep connection to animals, and love of the horse, led her to explore complementary curves and juxtaposed angles within the body of the horse. Compelled to restructure and emphasize what the horse would look like as it shifted with each position of its body, she spent two years developing the ideas for the basis of her paintings, and painted only horses for the first five years of her style.

Her experience as a graphic designer led her to test a variety of grids until she discovered connections in the shapes that reinforced the anatomy of her subjects. Her love of finding shapes and forms within her subject matter is easily discernible within every painting she creates. 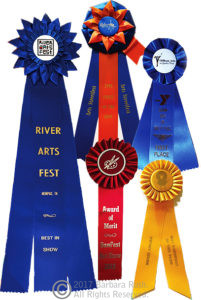 When creating her art she always completes the backgrounds first, using heavy bodied acrylics with impasto techniques and dry brush, or glazes, to finish the layers. She allows herself complete freedom in the background in contrast to the tight forms that are used to convey her subject matter. Designs of her subjects are created on paper, once they are complete, she transfers her sketches to the canvas. Merging the elegant geometric compositions of horses, florals, or other creatures onto the loose backgrounds.

Ms. Rush then applies colors into the heavily gridded shapes, or curves, that in the same moment break apart and hold the subject matter together. Quill brushes (not masking tape) are used to create precise lines and curves. She enjoys leaving a space between the shapes to allow the background to pass through, reminding us that although our world appears to be solid there is a life force that exists, between our molecules, creating movement within all things. Life is molded from lines and shapes, capturing the essence of its energy on the canvas.

All in all, Ms. Rush’s unique way of connecting with her subject matter, combined with her unique style, bold colors, and analytical analysis of interlocking shapes, make her paintings resonate with vitality and significance in the art world.

The result is what she calls “GeoCubism” and it is the way she has been painting since 2006.

The Gallery:
Well as life would have it little Roswell, GA is growing up and a developer purchased the property where my gallery, Synergy Fine Art, has been since 2007. We closed our doors on September 1, 2018. But fear not! LOL…You can currently find some of my work in Roswell, at Serendipity on Oak St, near the Roswell Square. If you are looking for dog prints they are available at the Downtown Pooch on Canton Street. And, of course please check my EVENTS to find my schedule of shows.

The Animals:
Over the years she has had the privilege of many animal companions. One of her first pets was a guinea pig named Twinkles who would follow her all around the house and even on adventures outside around the yard. She learned, from her Mother, to raise and release animals so when she found an orphaned possum it became a cherished companion before it grew up and was released on a strawberry farm. She talked her father into giving one of his prized pointer puppies to her at an early age and enjoyed taking her dog, Frito, on long walks in the woods, bike rides and having Frito jump courses in the backyard.

Her family always had cats, quail, and litters of hunting dogs…her brother even had a chicken coop in the backyard. She road horses at the local riding academy, raised tropical fish and even had a pigeon that would ride on the windshield wipers of her car, fly home to greet her, peck at her bedroom window at dawn, and come when she called it…really.

Today she is the proud parent of two half-Siamese cats… Lily and Daphne.

Search Art by Subject Here
Have You Seen These Yet?